Home / Events / An evening with Tom Sharpe of Mannheim Steamroller 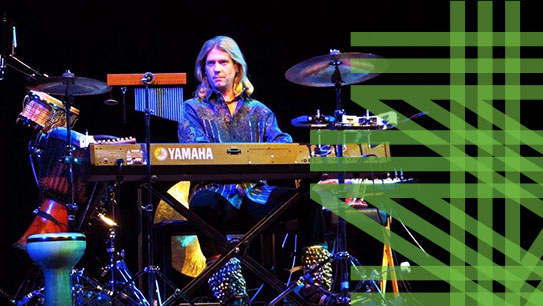 Tom Sharpe’s music is a percussive symphony–a sonic and visual feast for the senses. Best known as the drummer for Mannheim Steamroller, Tom dramatically blends a classical background with world music instrumentation that invites the listener into the heart of the music. Program includes original compositions featuring symphonic and world percussion.

Tom Sharpe is an internationally recognized, award-winning composer, performer, and recording artist. He is a sought out clinician and performer of his own works, and the artistic director and principal performer of the SHARPE WORLD MUSIC ENSEMBLE. Along with his own music, Tom is the drummer for the widely popular, Grammy award winning group, MANNHEIM STEAMROLLER.

Tom is an alumnus of the Interlochen Arts Academy, and holds the degrees Bachelor of Music and Master of Music from DePaul University in Chicago. He has spent years developing his unique style of visually stimulating performance and lyrical composition. A classically trained musician, Tom has blended his orchestral background with world music instrumentation and cinematic imagery to create an experience that invites the listener into the heart of the musical moment – wildly emotional and technically precise, with a gutsy edge of percussive frenzy and tribal ritual.

Tom’s debut CD “Like Setting Myself on Fire” was released to critical acclaim. The title track of the CD was voted “Grand Prize Winner” – World Music Song of the Year by the John Lennon Songwriting Contest. “Trance-formation”, another album track, received honors as one of three finalists in the same category. Tom also won the 2007 Broadjam World Music Contest with “The Burning Sands”, and has been honored as a finalist in the USA Songwriting Competition and the Unisong International Songwriting Competition. He has also received outstanding achievement awards in composition from VH1, Disc Makers, and the Great American Songwriting Contest.

Tom performed the world premiere of “Like Setting Myself on Fire” at the Rock and Roll Hall of Fame in Cleveland, OH. He was a featured artist at the 2004 NAMM Show in Anaheim, CA, and at the Nashville New Music Conference in Nashville, TN, for two consecutive years. In 2005 Tom was featured in the PBS Special “Arts Across Illinois”. In 2006 and 2007 Tom provided the live soundtrack for Dance Chicago’s World Rhythms and Dance series, International Rhythms series, and Grand Finale at the Athenaeum Theatre in Chicago, as well as performed on stage. He was commissioned to write a world music ensemble piece that was performed at the National Percussion Festival in Indianapolis in March 2007, and premiered his first symphony for world percussion with his ensemble and the Elmhurst College Choir in concert in April 2007. In 2008, Tom performed at the “Great Performers of Illinois” festival in Millennium Park, Chicago. 2007–2015 has found Tom performing live as a solo artist, with his ensemble, with Mannheim Steamroller, and with Dennis DeYoung of the famed rock group Styx, as well as guest appearances with Lenny Kravitz, Martha Davis of the Motels, Martina McBride, American Idol favorite David Archuletta, and select US tour dates with singing supergroup IL DIVO. His national television performances include NBC’s Pandora Unforgettable Moments on Ice, the Oprah Winfrey Show, A+E, AXS TV, Nightline, PBS, and WGN.. In June of 2012 Tom was honored to have the unique experience of judging the Miss New Mexico Pageant for Miss America, and in 2013 he was a keynote speaker at the 13th Annual Self Employment in the Arts Conference. He released his second album “Lifting the World – A Symphony by Tom Sharpe” in 2014. Tom can also be heard on the CD “Mannheim Steamroller, Christmas Symphony II” (2013) and the Blu Ray/CD package “Dennis DeYoung and the Music of STYX, Live in Los Angeles” (2014). Tom is endorsed and represented by the Yamaha Corporation of America, Sabian Cymbals, Vater Sticks and Mallets, Aquarian Drum Heads, Black Swamp Percussion, HipTrix Glowing Percussion, the Illinois Arts Council, and Class Act Entertainment. 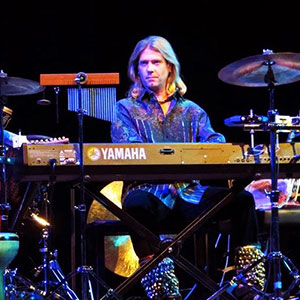 Tom Sharpe’s music is a percussive symphony–a sonic and visual feast for the senses. Best known as the drummer for Mannheim Steamroller, Tom dramatically blends a classical background with world music instrumentation that invites the listener into the heart of the music. Program includes original compositions featuring symphonic and world percussion.