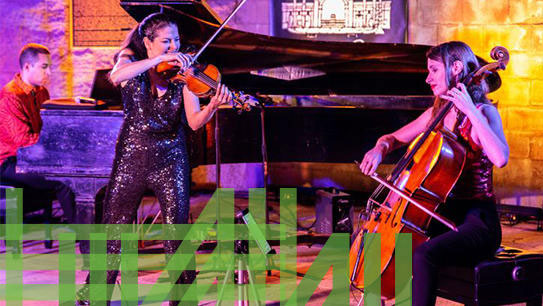 With a flair for the wild and unexpected this genre-defying trio is back to combine top pop hits, Americana, and classical with rock-star charisma.

With a flair for the wild and unexpected, the genre-defying trio, TAKE3, brings the refinement of a rigorous classical music background and infuses it with rock-star charisma. Known for their infectious and down to earth onstage personalities, this threesome leaves their indelible mark on captivated crowds around the country performing their arrangements of top pop hits, Americana, and classical favorites. Although only together for a short time, the trio already has an impressive season lined up, visiting PACs and performing with orchestra in most of the 50 states. No strangers to the stage as individuals, they have made an impact on the music scene as soloists, touring the world with Yanni, recording tracks for film and television, and as soloists in front of Symphony Orchestra. TAKE3 makes it their mission to impart their love, passion and joy in music making to all who hear them, using their artistic ability as conduit for storytelling.

LINDSAY DEUTSCH
With her limitless enthusiasm and vast gifts as a performer and entertainer, American violinist, Lindsay Deutsch, is a charismatic and captivating presence on today’s music scene. She has thrilled audiences world-wide with her passion for music and brilliant display of technique and musicianship.

Lindsay Deutsch is presently touring as a solo violinist with Yanni having just finished up tours with him throughout North America, Saudi Arabia, Uzbekistan, and Abu Dhabi. Future tours will include Indonesia, China and more.

Maestro Jung-Ho Pak, conductor and artistic director of the Cape Symphony Orchestra, says of Lindsay, “A conductor dreams about finding a soloist who understands the essential responsibility of helping change a large community’s view of classical music. In a time when every concert has to be unforgettable and a game changer, Lindsay can make that happen every time.”

Ms. Deutsch received her education from the Colburn Conservatory in Los Angeles, where she studied under Robert Lipsett. Lindsay Deutsch plays on an 1845 Jean-Baptiste Vuillaume violin.

JASON STOLL
Southern Californian pianist, Jason Stoll, has garnered many praises and awards for his performances throughout his career thus far.

Over the years, Mr. Stoll has been both participant and performer at several notable summer music festivals including the Aspen Music Festival, and Pianofest in the Hamptons. While in residence at these festivals, Mr. Stoll has had the privilege of working closely with faculty from many prestigious conservatories and universities.

MIKALA SCHMITZ
Hailed by San Francisco's Civic Center for her "...professional and highest caliber of playing," Los Angeles-based cellist Mikala Schmitz is an avid performer of many different styles of cello playing. Ms. Schmitz often finds herself crossing over into a variety of musical genres. From jazz and electronic to classical and baroque, Mikala continues to find new and fascinating collaborative avenues.

Mikala's work with the English rock group The Last Shadow Puppets took her all over Europe, and you can hear her on their EP Dream Synopsis . You can also hear her on television shows such as Netflix's Chef's Table and HBO's The Brink . Ms. Schmitz will resume her award-winning tenure with Tim Robbins’s acting troupe, The Actors’ Gang, on a national tour of their production of The New Colossus , an original one-act play written and directed by Tim Robbins and members of the cast, with original music by Ms. Schmitz and David Robbins. 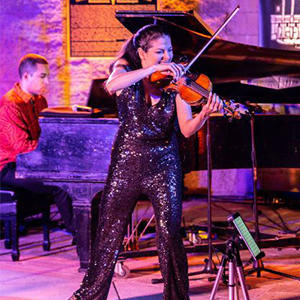 With a flair for the wild and unexpected this genre-defying trio is back to combine top pop hits, Americana, and classical with rock-star charisma.