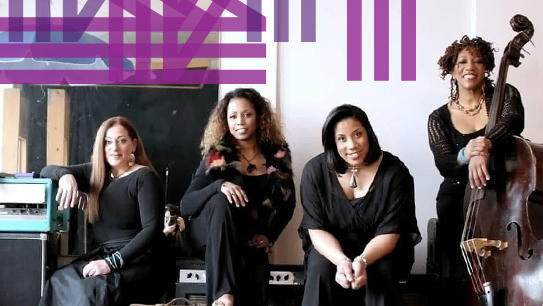 Detroit’s Straight Ahead is a group of strong, inventive instrumentalists and vocalists who have shown themselves to be powerful and imaginative composers and arrangers. The Straight Ahead sound ranges from mainstream to contemporary, even spanning Latin jazz and a touch of hip-hop. Their live performances are a dynamic celebration of power and joy with a wide range of musical textures, moods and tempos.

The Block has created a new Safe Nights at The Block health policy for indoor gatherings. This includes providing proof of vaccination, with the last dose administered at least 14 days before concert admission. Unvaccinated patrons will be admitted with a negative Covid-19 test administered within 72 hours of each concert. Masks will be required regardless of vaccination status while Muskegon County transmission risk remains at substantial or high, according to the CDC’s system. Children under the minimum age for vaccination are welcome with face covering masks and proof of a negative test. Please continue to check this website for updates.

Founded in 1989 as Miche Braden and Straight Ahead an all-female ensemble, The group consisted of Miche Braden vocals, violinist Regina Carter, pianist Alina Morr, bassist Marion Hayden and drummer Gayelynn McKinney. When vocalist and actress Braden moved to New York, it was this quartet (without Braden) that were invited to open for the legendary Nina Simone at the Montreux-Switzerland Jazz Festival in 1990.

The quartet then added vocalist Cynthia Dewberry, and was signed to make three albums for Atlantic Records. After the second album Carter left for New York to pursue her international solo career. The third album featured a number of guest soloists such as guitarist Fareed Haque and alto saxophonist Kenny Garrett.

A number of other talented musicians have toured with Straight Ahead over the years, including vocalist Fatima, flutist Althea Rene (included in the group’s two independent CDs), as well as violinist Karen Briggs and saxophonists Sabrina Lamar and Norma Jean Bell.

Straight Ahead’s founding members are the foundation for the band with Marion Hayden on bass, Alina Moor on piano and Gayelynn McKinney on drums Hayden and McKinney are known as first-call players for any project involving modern jazz, where Morr brings to the table her expertise in and affection for Latin music as well as blues and gospel. The current group also includes vocalist Kimberly Wright and for the first time outside of recordings, a male saxophonist, Yancyy. Wright comes from an R&B and pop direction and Yancyy represents a contemporary jazz and gospel perspective.

Recognized for their eclectic and soulful approach to creating music, the Straight Ahead sound ranges comfortably from mainstream jazz R&B ballads, avant- garde to Brazilian funk.

MARION HAYDEN
Marion Hayden is one of very few female jazz bassists, in her case deciding to stay close to home while becoming one of the more enduring instrumentalists in the Midwestern United States. Born in Detroit, MI, she is the daughter of Marion and Herbert Hayden, her father an avid record collector and jazz pianist himself. Growing up on the industrial west side of the Motor City, she took up piano at the age of nine, followed by the upright acoustic bass at 12. In the summer Metro Arts program she met Wendell Harrison and Marcus Belgrave, who would become teachers, and in time lifelong collaborators. Hayden attended Cass Tech High School and graduated from Henry Ford High School, took classes at Michigan State University and then the University of Michigan, gaining a liberal arts degree with a minor in entomology. She took a position with the Michigan Department of Agriculture while working the nightclub circuit playing jazz with Belgrave, pianist Charles Boles, Teddy Harris, Jr., the Jimmy Wilkins Orchestra, Buddy Budson, LaMonte Hamilton, saxophonist George Benson, Marvin "Doc" Holladay, Randy Gelispie, Donald Walden, Kenn Cox, and Stan Booker. Briefly disillusioned with the jazz scene in the early '80s, she took a two-year hiatus before her career was revived through playing again with Cox, and most notably master percussionist Roy Brooks in his combo the Artistic Truth. For a time while married to guitarist Bill Banfield, she worked on joint projects with him including symphonic and cinematic music reflecting her classical training. From there her career took off as one of the founding members of the all-female ensemble Venus, followed by the band Straight Ahead in collaboration with Regina Carter. This versatility led her to a wide variety of engagements, but also gave her the opportunity to become a high-level educator. She became a professor of bass instruction in the jazz department of Tri-C College in Cleveland, OH, and was installed in the faculty at the University of Michigan School of Music. She has performed or recorded with such jazz veterans as Kirk Lightsey, Ralph Peterson, Jr., Terry Callier, Dizzy Gillespie, Sonny Fortune, Kenny Burrell, Steve Turre, Cecil Bridgewater, fellow Detroiter James Carter, and countless other professionals passing through. Straight Ahead have maintained a local presence beyond their recordings, Hayden was also heard with the band of saxophonist Allen Barnes, and is a member of the Modern Jazz Messengers led by drummer Sean Dobbins. Her solo CD Visions was released in 2008, and she has composed a suite based on the writings of poet Phyllis Wheatley.

ALINA MOOR
Alina Moor entered the jazz scene via the blues, working with many of the Midwest's finest blues talents before immersing herself in jazz. Her rich, full sound was honed in the traditional manner, studying and playing with "the cats". An inveterate wanderer, she accepted an invitation to visit the Caribbean and ended up living in Santo Domingo in the Dominican Republic. Returning to the states, she lived in Boston where she studied with former jazz messenger and Grammy-winning composer Donald Brown.

GAYELYNN MCKINNEY
Born and raised in Detroit Michigan, Gayelynn's father, the legendary Harold McKinney, was a formidable jazz pianist, composer and teacher who mentored many people and played with such great as, Billy Holiday, Gene Krupa and many others. Her mother Gwendolyn McKinney was a fashion model and renowned singer, singing in such productions as Carman and Porgy and Bess. She was also recorded on Harold McKinney's “Voices and Rhythms of The Creative Profile.” As a vocal instructor she mentored many successful vocalist, including one of Ray Charles's Raylets. Gayelynn began playing the drums at the age of two and has had ample exposure to the creative music scene since birth. She received much of her musical training on the Detroit Jazz scene, but, she also obtained her Bachelor's Degree in Music from Oakland University. At the university she was a part of the Meadowbrook Estate a renowned show choir and a member of the university jazz band. At Oakland University she learned music theory and composition. Among Gayelynn McKinney's many awards, she was presented with an award for outstanding musical performance during Music Fest, USA where she won best drummer beating out over nine thousand participants. McKinney was recently awarded the Motor City Music Award with the Grammy nominated group Straight Ahead, that she is also cofounder of. Gayelynn McKinney's diverse drumming style has given her the opportunity to travel extensively and play at many famous jazz festivals including Montreux-Switzerland, Lionel Hampton Jazz Fest New Orleans Jazz and Heritage, Boston Globe, Jamaica Jazz and Heritage, the 1996 Olympics, the Woman Jazz Fest in Italy and the Kennedy Center. Gayelynn recently recorded a solo project called “It's About Time,” which has given her the opportunity to perform as a band leader. Also as a band leader, she has rekindled her fathers music, with a sextet called McKinfolk. She has also performed as a side musician with such notables as, Aretha Franklin, Geri Allen, Marcus Belgrave, Chaka Khan, Mary Stallings, Eric Reed, Roy Hargrove, Javon Jackson, David “Fathead” Newman, Steve Turre, Sonny Fortune, Kevin Mahogany and “Speech” of Arrested Development, just to name a few.

KYMBERLI WRIGHT
Kymberli Wright is a gifted vocalist who is accomplished in the areas of jazz and R&B styles. Originally from Flint, Michigan - she has been recording since the age of 13 and is among one of the most sought after studio artists in the Midwest, having recorded with such renowned artists as Stevie Wonder, Earl Klugh, George Clinton of P Funk, Gene Dunlap, Omar Hakim, Kid Rock, Bon Jovi, Craig Holliman, Brownstone and Pack of Wolves. Inspired by such singers as Chaka Khan, Dee Dee Bridgewater, Judy Garland, Nancy Wilson, and Dionne Warwick, Kym has touched audiences all over the world with her voice. Her playful and sensual vocals certainly put her different projects over the top.

YANCYY
Yancyy is a proven entertainer for music enthusiasts of every generation. His signature fluid sounds and interpretive mastery are the mélange of refined raw talent, diligent and continued study, with an intense passion for music and the listener. Yancyy’s impeccable styling and artistic charisma are not confined to genre distinction, enchanting the jazz-heads, serenading classical aficionados, inspiring the ecclesiastics and electrifying pop, rock, funk and hip-hop fans. A native of Detroit, Michigan, Yancyy recalls hearing a saxophone solo in church at the age of 13, and was gripped by the impact on the congregation, captivated by its penetration of the heart and mind. Dawning a devout humanitarian, he envisioned himself orchestrating this melodious emanation healing and deliverance, and knew that becoming one with the instrument, he would bring peace and delight to all who were able to hear. Yancyy’s ambition was so undeniable that his father soon surprised him with an alto sax, and he blossomed overnight as a self-taught prodigy. He joined his high school band, and within two years, renowned classical saxophonist Donald Sinta sponsored Yancyy’s attendance at the prestigious Interlochen Fine Arts Academy. He continued his pursuit of artistic excellence, earning his B.F.A. in performance at University of Michigan’s acclaimed School of Music, and remains a faithful academic, amassing a collector’s dream of instruments, equipment and a respectable library of instructive materials.

Yancyy is also a dynamic motivational speaker, lecturing for Detroit’s Center for Creative Studies, as well as Ford Motor Company’s UAW Adult Education Series. He partners with community, youth and other charitable organizations, and currently sits as Board President of Little Scholars Performing Arts Program. His constitution remains: “I believe music is a spiritual art form that denotes the life and times of our culture. I use music as a medicinal tool for the listener’s soul.” From an early age, i knew i was called to create rhythmic vibrations of joy and melodic inspiration. Over the years, I have witnessed music's ability to uplift, motivate, transcend and penetrate the hearts of humanity. Armed with my horn, I will continue to knock down barriers; awaken the spirit and serenade the heart. 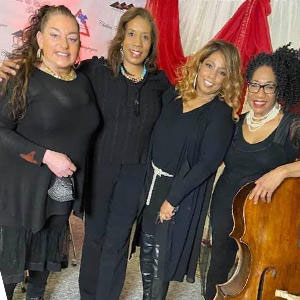 Detroit’s Straight Ahead is a group of strong, inventive instrumentalists and vocalists who have shown themselves to be powerful and imaginative composers and arrangers. The Straight Ahead sound ranges from mainstream to contemporary, even spanning Latin jazz and a touch of hip-hop. Their live performances are a dynamic celebration of power and joy with a wide range of musical textures, moods and tempos.

The Block has created a new Safe Nights at The Block health policy for indoor gatherings. This includes providing proof of vaccination, with the last dose administered at least 14 days before concert admission. Unvaccinated patrons will be admitted with a negative Covid-19 test administered within 72 hours of each concert. Masks will be required regardless of vaccination status while Muskegon County transmission risk remains at substantial or high, according to the CDC’s system. Children under the minimum age for vaccination are welcome with face covering masks and proof of a negative test. Please continue to check this website for updates.