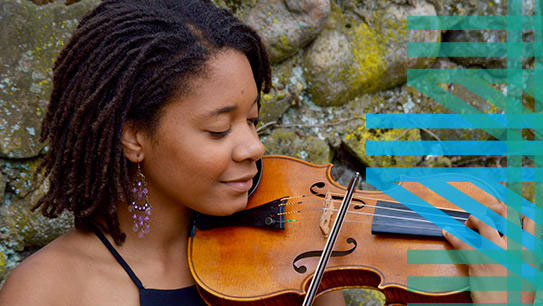 22-year-old Njioma Grevious is happy every time she picks up the violin, whether performing at the White House or for underserved children in her native New
York. This will mark her West Michigan debut, with WMS on Friday and at The Block on Saturday.

A versatile chamber and orchestral musician, violinist Njioma Grevious of Washington, DC and New York City, completed her undergraduate studies at The Juilliard School and was awarded the John Erskine Prize for scholastic and artistic achievement. She won First Prize for Performance and Interpretation in the Prix Ravel chamber music competition in France in 2018 and a Music Academy of the West Keston-Max Fellowship to study and perform with the London Symphony Orchestra in 2022.

Along with her colleagues in the Abeo Quartet, Njioma won a First Prize and the Audience Favorite Prize at the 2022 Yellow Springs Chamber Music Competition, Silver Medals in the 2022 Chesapeake International Chamber Music Competition and the  2019 Fischoff Chamber Music Competition, as well as finalist in the 2021 Young Concert Artists competition.  Abeo has appeared on WQXR Midday Masterpieces and WETA Classical Radio as well as in performances at Alice Tully Hall, The Kennedy Center, in Montreal, and Oslo, Norway, and in residence at the Glenstone Museum, where they premiered  “Moonshot” by Alistair Coleman.  At Juilliard, the quartet studied under the tutelage of the Juilliard String Quartet and has been coached by members of the Alban Berg, Quatuor Ebene, Takács, Artemis, Brentano, Miró and Emerson quartets. Abeo is the inaugural Graduate String Quartet in Residence at the University of Delaware under the mentorship of the Calidore Quartet.

Njioma also performs as a soloist, having appeared with the Chicago Philharmonic, and as an orchestral musician. She has been invited to perform with the Montclair Orchestra, among others. Njioma has performed in chamber music series including Sound Off: Music for Bail concerts as well as in projects including the recording of Naomi Raine’s “Find My Peace.”

She has been invited to participate in festivals including Music@Menlo, Perlman Chamber Music Workshop, Juilliard String Quartet Seminar, Norfolk Chamber Music Festival, Music Academy of the West, Montreal International String Quartet Academy, Meadowmount, Fontainebleau Schools and Boston University Tanglewood Institute. She was a concertmaster of the Juilliard Wind Orchestra and performed on tour in Germany, the Czech Republic, The Netherlands, Spain, Argentina and more as a member for five years of the Boston Philharmonic Youth Orchestra.

For many years Njioma was a scholarship recipient through Boston’s Project STEP string training program for black and Latinx youth and at the time also earned summer study scholarship assistance through Winsor Music.  Her principal teachers have included Ronald Copes, James Buswell, Mariana Green-Hill and Farhoud Moshfegh. Njioma, who began studying the violin at the age of 4, has since performed in numerous volunteer concerts with her siblings and many others.  As a Juilliard Gluck Fellow she performed regularly for the medically vulnerable, retirees and children. These days Njoma loves teaching composition and collaboration to NYC elementary and middle school students from underrepresented communities through the Opportunity Music Project. 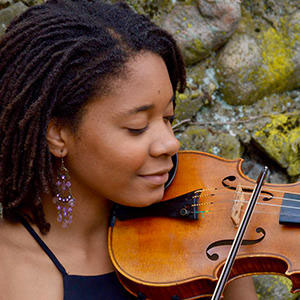 22-year-old Njioma Grevious is happy every time she picks up the violin, whether performing at the White House or for underserved children in her native New
York. This will mark her West Michigan debut, with WMS on Friday and at The Block on Saturday.