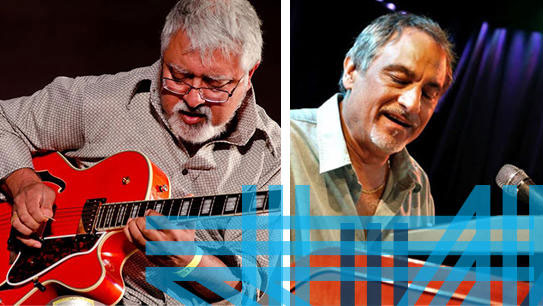 Originally slated to appear in May 2020, virtuoso guitarist Fareed Haque and acclaimed jazz organist Tony Monaco are back on the Block lineup and eager to perform live for West Michigan audiences at last! A protégé of the legendary Jimmy Smith, Tony is artist-in-residence at Hope College and a leading performer and clinician. Their CD Furry Slippers reached the top 10 in Jazz Radio Airplay.

FAREED HAQUE
Fareed Haque is a modern guitar virtuoso. Steeped in classical and jazz traditions, his unique command of the guitar and different musical styles inspire his musical ventures with tradition and fearless innovation.

Since 2011, Haque has returned to his first loves, jazz guitar and classical guitar. He has been busy performing and recording with his trio featuring legendary B3 virtuoso Tony Monaco, his own trio and jazz quartet, as well as his larger world music group the Flat Earth Ensemble.

In addition, Fareed has performed at the Chicago, Detroit, and Java Jazz festivals and was featured as part of the Made in Chicago Series performing with his numerous groups at Millenium Park's Pritzker Pavillion in Chicago. He also performed and arranged numerous classical programs as 2013 artist-in-residence for The Chicago Latin Music Festival, was featured on WBEZ, as well as WFMT's Fiesta! radio programs, and has recorded his arrangement of Piazzolla's 5 Tango Sensations, El Alevin by Eduardo Angulo Leo Brouwer's Quintet for Guitar and String Quartet with the critically acclaimed Kaia String Quartet. Haque continues to tour and record extensively along with documenting his unique teaching methods in a series of best selling interactive video courses through TrueFire.

In 2016, Haque was invited to perform at the Indianapolis Jazz Festival Tribute to Wes Montgomery along with Peter Bernstein, Bobby Broom, Henry Johnson, Will Mathews, Russell Malone, Pat Martino, and Dave Stryker. He was also a visiting scholar at Western Michigan University. Recent projects include artistic directorship of numerous jazz festivals, performances with Tony Monaco, Paquito D'Rivera, Vijay Iyer, pundit Vikku Vinacrayam, long-anticipated reunion concerts with Garaj Mahal, concerts in India, a return to Java Jazz, and concerts and teaching in China. In 2017, Mr. Haque released The Bridge with virtuoso Chilean bassist Christian Galvez and renowned Indian percussionist Selva Ganesh. Haque has also rekindled his duo with Goran Ivanovic. Performances include Canadian Guitar Festival, Winters Jazz Fest NYC, Lotus Music Fest, and many others. Upcoming tours in China and Europe are slated for 2018. Haque has joined drum legend Billy Cobham as a member of his Crosswinds Ensemble featuring Haque on guitars, Randy Brecker on Trumpet, and Paul Hansen on sax and bassoon. Extensive touring and recording are slated for 2019. Haque's most recent release NEW LATIN AMERICAN MUSIC FOR GUITAR AND STRING QUARTET was picked by Howard Reich of the Chicago Tribune as one of the top releases of 2018. In addition, the release was chosen as Downbeat Magazine Editor's Pick in 2018. 2019 portends to be a busy year, as Haque has retired from 30 years at Northern Illinois University to accommodate extended tours with Cobham, Goran Ivanovic, and his own groups. Highlights to include The Montreux Jazz Festival with Cobham, and appearances with his own groups at The Bluenote Beijing, Louisville, and Minneapolis Guitar Festivals among others. New recordings with his own group and with Goran Ivanovic are scheduled for 2019, under the legendary Delmark Label.

Born in 1963 to a Pakistani father and Chilean mother, Fareed’s extensive travels and especially long stays in Spain, France, Iran, Pakistan, and Chile exposed Haque to different kinds of music from a very early age. While this natural eclecticism has become a hallmark of Haque’s music, it was repeated visits to Von Freeman’s Chicago jam sessions that gave Haque a grounding in the Chicago blues and jazz traditions. The 1981 recipient of North Texas State University’s Jazz Guitar Scholarship, Haque spent a year studying with renowned jazz guitarist and pedagogue Jack Peterson. Fareed’s growing interest in the classical guitar led him to transfer to Northwestern University, where he completed his studies in classical guitar under David Buch, John Holmquist, and Anne Waller.

Soon after his transfer to NU, Haque came to the attention of multi-instrumentalist Howard Levy and joined his latin-fusion group Chevere. Thru Levy, Haque was introduced to Paquito D’Rivera and began a long and fruitful relationship with the Cuban NEA Jazz Master. Numerous world tours and recordings including Manhattan Burn, Celebration, Havana Cafe, Tico Tico, Live at the MCG were to follow. Especially notable is the classic and award winning Reunion featuring Haque along with Arturo Sandoval, Danilo Perez, Giovanni Hidalgo, Mark Walker, and David Fink.

Thru D’Rivera, Haque was brought to the attention of Sting, who had just begun his record label Pangaea. Sting invited Haque to join the label and he released 2 critically acclaimed recordings, Voices Rising and Manresa. Haque toured briefly with Sting, including notable appearances at The Montreux Jazz Festival, as well as NBC’s Michelob Presents Sunday Night with David Sanborn, but his own career demands led Haque in other directions.

Haque has been featured on WTTW’s ArtBeat and Chicago Tonight, Ben Sidran’s New Visions, Michelob Presents Sunday Night with David Sanborn on NBC, his own Lonesome Pines special for PBS, and on BET cable jazz channel. Fareed has twice been selected as Talent Deserving Wider Recognition in Downbeat Magazine. In 1989, Haque also joined the faculty at Northern Illinois University as professor of jazz and classical guitar. He continues to teach at NIU to this day.

After a short stint at Warner Bros. recording Majestad (unreleased and featuring John Patitucci, Michael Landau, Russel Ferrante, Grazinha, Lenny Castro, and Carlos Vega!), Bruce Lundvall signed Haque to the legendary Bluenote Records. While at Bluenote, Haque recorded three albums as a leader: Sacred Addiction, Opaque, and Déjà vu. Haque toured and recorded extensively with other artists, including tours and 3 CDs with Javon Jackson: A Look within, For One Who Knows, and Good People. In addition, sideman credits include tours and recordings with Joe Henderson, Herbie Mann, Bob James, Richie Cole, Joey Calderazzo, Kahil El Zabar and the Ethnic Heritage Ensemble, and numerous Bluenote recordings for producer/arranger Bob Belden alongside Cassandra Wilson, Dianne Reeves, Joe Lovano, Paul Motian, and many others. Numerous classical recitals, as well as appearances with the Vermeer Quartet and many symphonies across the US and abroad, added to an incredible diversity of performances during this period.

Thru Belden, Haque was invited to join forces with Joe Zawinul as part of his Zawinul Syndicate. The group proved to be one of Joe’s best and most eclectic. Included were percussionist and vocalist Arto Tuncboyacian, drummer Paco Sery, bassist Mathew Garrison, along with Haque on Guitar and Electric Guitar. A year of extensive touring brought Haque closer to his Jazz/Rock roots.

In 2004, Fareed premiered his Lahara Double Concerto for Sitar/Guitar and Tabla with The Chicago Sinfonietta at Symphony Center in Chicago, under the baton of maestro Paul Freeman, featuring tabla virtuoso Ustad Zakir Hussain, to whom the work is dedicated.

In 2006, Fareed was commissioned to compose a classical guitar concerto for the Fulcrum Point Ensemble. His Gamelan Concerto was premiered in May of ’06 at The Harris theatre in Millenium Park. In 2007, Garaj Mahal won an Independent Music Award.

After 10 years of over 2000 dates with Garaj Mahal, Haque’s interest in electronic music and the Moog Guitar spurred him to leave Garaj Mahal and form Fareed Haque’s MathGames, featuring bassist Alex Austin and drummer Greg Fundis.

Notable events during this time include Haque performing and assistant directing the first Jazz Festival en la Patagonia in Frutillar, Chile under his mentor and friend Paquito D’Rivera, and appearances with his own groups at Java Jazz, The Chicago Jazz Festival, The Twents Guitar Festival, The Indy Jazz Fest, Coleman Hawkins Jazz Fest, Jazz in June, The Lafayette and South Bend Jazz Festivals, Sophia Jazz Fest, Bulgaria and many others around the world. Haque also performed at both the Aranjuez and Villa-Lobos guitar concertos (in one concert!) with The Chicago Philharmonic, under the baton of Lucia Matos at Pick-Staiger Concert Hall.

TONY MONACO
Tony Monaco began his keyboard life at age eight, on the accordion. When he was twelve, his destiny as a jazz organist was sealed when he first heard Jimmy Smith. An enthusiastic student, Tony began working in Jazz clubs as a teenager in his native Columbus, Ohio, guided by local organ gurus Hank Marr and Don Patterson. For further inspiration, he studiously absorbed the mastery of Jimmy McGriff, Richard "Groove" Holmes, Charles Earland, Jack McDuff, and Dr. Lonnie Smith. All would play a role in the development of his musical palette. On Tony's sixteenth birthday, his prayers were answered. He received an encouraging phone call from Jimmy Smith, who soon became his Mentor/Teacher. Four years later, Jimmy Smith invited Tony to come play at his club in California--a peak lifetime experience for Tony.

From 1980 to 2006, Tony stood by his family businesses and married to have three daughters, while running Monaco’s Palace Italian restaurant for ten years while performing weekly in the lounge. Tony then entered the food brokerage industry peaking towards Torchbearer status with SYSCO foods. Always inspired by music, Tony then went to work as an assistant Broadcast producer for a prominent ad agency learning his production skills and playing gigs at night to continue supporting his family. After graduating from college with a B.S.B.A. from Franklin University in 1989, Tony's occupation changed again to supervisor of Monaco Concrete ( “my Father needed a good manager and my daughters were getting close to going to college!”).

An ardent student of the organ, it's no surprise that Tony is an accomplished teacher as well. In addition to private students, classes and clinics, Tony has produced a series of instructional DVDs titled "Playing Jazz Hammond" that have quickly become indispensable for any serious student of the organ. Tony teaches Lessons online with a system he created giving lessons one on one online to anyone from anywhere around the globe!

Presently, Tony maintains a busy schedule touring, including festival appearances ,clinics and workshops I In 2007 he appeared on the cover of Keyboard Magazine. April 2012, Tony released "Celebration Life * Love * Music, a two disc set of all originals as he continues to Celebrate his Musical gifts and shares his gifts to everyone. Tony’s drive as an innovator and missionary continues to carry forward his passion for the Hammond Organ. Now Executive Producer of the Summit Records subsidiary Chicken Coup Records, he has recorded and released CDs for several undiscovered organists around the globe, and his role as educator has allowed him to spread and cultivate many new hopefuls to the art of the jazz organ.

Tony continues his mission to raise awareness and appreciation of jazz organ and its importance in genres as diverse as traditional Gospel, RnB and Modern Jazz. He is formulating new strategies and record deals using his network through Chicken Coup Records to help himself and his peers and students advance in this ever changing music market and utilize new technologies and markets. Tony is a vital source of musical experience, knowledge and humility ready, willing and able. In 2017, Tony celebrated a special anniversary, celebrating 50 years as a musician! In January 2019, Tony is released his 11th Internation release "The Definition of Insanity" on his Chicken Coup Records label. He will be recording his second venture with Drummer great Steve Smith and Guitarist Vinny Valentino as Groove Blue Trio Tours Russia and Europe. Tony's looking forward to recording both new Instructional Vids as well as New Music while touring globaly! 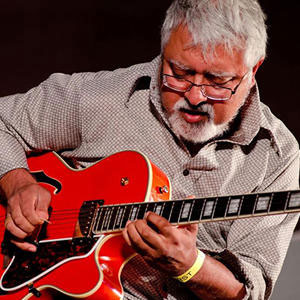 Originally slated to appear in May 2020, virtuoso guitarist Fareed Haque and acclaimed jazz organist Tony Monaco are back on the Block lineup and eager to perform live for West Michigan audiences at last! A protégé of the legendary Jimmy Smith, Tony is artist-in-residence at Hope College and a leading performer and clinician. Their CD Furry Slippers reached the top 10 in Jazz Radio Airplay.