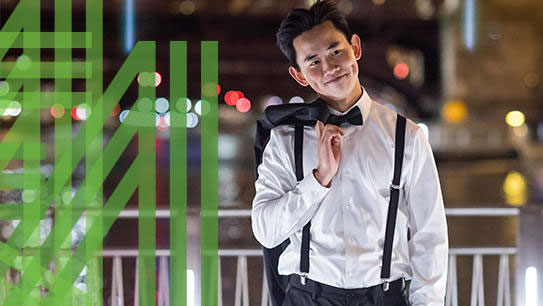 Multifaceted jazz musician and actor Bryan Eng is one of his generation’s most promising young entertainers. His cool sounds and unique talents have been featured on Broadway, TV, films, commercials, and revered stages across the country.

BRYAN ENG
Multifaceted actor and jazz musician, Bryan Eng has already begun to make big strides across industries in the entertainment scene. His unique talents have been featured on Broadway, TV, feature films, commercials, and revered performance venues around the country such as the Kennedy Center, Drury Lane Theatre, Lookingglass Theatre, Marriott Theatre, Ford’s Theatre, Nighttown and others.

Growing up in Potomac, Maryland, Bryan began singing and playing the piano at the age of 5, developing his fluid classical technique.  His natural showmanship ultimately led him to the theatre where his starring acting roles throughout high school earned him a Superintendent’s Award for Outstanding Contributions to the Theatre and a DC Metro Theatre Arts recognition for Outstanding Performance.  Bryan’s access to the vibrant DC arts scene proved influential to his burgeoning career with performance debuts at the Kennedy Center, Ford’s Theatre and Studio Theatre before graduating high school.

Bryan continued his education studying Theatre and Music at Northwestern University where once again, his proximity to a world-class entertainment capital would prove invaluable.  After his first year, he enrolled at Northwestern’s Bienen School of Music adding a second major in Music.  Composition, orchestrations and arranging came naturally to him, and after a year of study, he was hired to orchestrate the music for a multi-million dollar gala hosted by Stephen Colbert.  His seamless ability to create music for ensembles across genres has led to orchestrating for numerous Broadway performers such as Heather Headley, Nancy Dussault and Richard Kind, as well as arranging for The American Pops Orchestra and Transcendence Theatre Company.  At the end of his sophomore year, he returned to the Kennedy Center to originate the role of Junker G in the world-premiere of Laura Schellhardt’s play, Ever in the Glades.

Shortly before turning 20 years old, Bryan’s talents as a performer earned him representation from one of Chicago’s finest talent agencies, Stewart Talent.  Within his first year on the Chicago scene, Bryan made his network television debut, commercial debut and Chicago theatre debut as an actor.  In that same year, he released his tour de force debut album, 20, featuring his talents as a singer, pianist, arranger, orchestrator and producer leading a 27-piece jazz orchestra.  This landmark debut year as a Chicago entertainer established him as one of his generation’s most promising young entertainers.

Since then, Bryan’s stardom has only found further footing. In the past couple of years, he has been featured in numerous commercials for major brands, acted in feature films, received rave reviews from the Chicago Sun-Times, Chicago Tribune, and Chicago Now, and headlined sold-out jazz shows around the country.

At the beginning of 2022, Bryan was cast as an understudy in the Broadway production of Neil Simon’s Plaza Suite starring Matthew Broderick and Sarah Jessica Parker. Now, living in the entertainment capital of the world, Bryan’s talents are being recognized on the most elite stage. 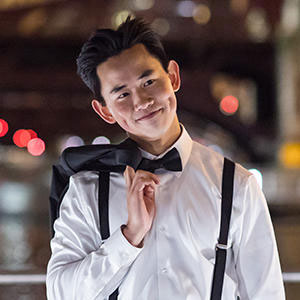 Multifaceted jazz musician and actor Bryan Eng is one of his generation’s most promising young entertainers. His cool sounds and unique talents have been featured on Broadway, TV, films, commercials, and revered stages across the country.