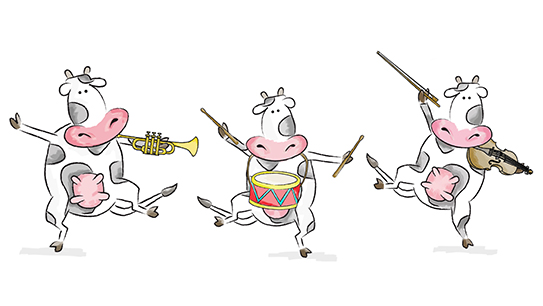 Join us for the third program in the Click Clack Moosic Series! The Singing Sheep asks us to sing along to E-I-E-I-O and learn about Pitch! We read Dooby Dooby Moo, Doreen Cronin’s third book in our series. Come see what these crazy Click Clack Moosic animals do when they enter the county fair talent show! Uh Oh!

About the Author:
Doreen Cronin grew up in Merrick, New York, with her parents, two brothers and a sister. They lived in a red house with a big backyard and a neighborhood full of kids. Her dad was a police officer and he was very, very funny! She decided that she wanted to be a police officer when she grew up, too. Or maybe even an FBI agent! When she actually did grow up, she realized she wasn’t actually brave enough to do those jobs!

It was her first-grade teacher, Mrs. Cooper, who first told her that she was a writer. Mrs. Cooper gave her extra writing assignments to encourage her. It was extra homework, but she loved it! She also loved the library – it was one of her favorite places to spend time.

Doreen Cronin graduated from Pennsylvania State University in 1988 and St. John’s Law School in 1998. After practicing law for a few years in downtown Manhattan, she left her job and decided to write full time. She’s been writing ever since! Thank you, Mrs. Cooper!

About the Illustrator:
Betsy Lewin grew up in Clearfield, Pennsylvania. She always loved to draw and can’t remember wanting to be anything but an artist. Her mother, a kindergarten teacher, is responsible for her love of children’s books. She read to Betsy and her brother every night: Winnie The Pooh, The Adventures of Babar, Uncle Remus, and all the fairy tale books. The illustrators A.B. Frost and Ernest Shepard were among her earliest heroes. Later on when she started illustrating for children, Betsy realized how strongly she’d been influenced by James Stevenson and Quentin Blake.

After graduating from Pratt Institute where she studied illustration, Betsy designed greeting cards. Then she began to write and illustrate stories for children’s magazines. When an editor at Dodd, Mead & Company asked her to expand one of those stories into a picture book, Betsy says, “I jumped at the chance. I’ve been doing picture books ever since and loving every moment.”

Betsy’s art is usually humorous, drawn in pen or brush with watercolor washes, as in Click, Clack, Moo; Cows That Type, but she also paints in a naturalistic style as in Chubbo’s Pool. Gorilla Walk is her first collaboration with her husband Ted and is about their trek to see the mountain gorillas in Uganda. This was followed by five more collaborations; Elephant Quest, set in the Okavango Delta, Top To Bottom Down Under, about their adventures in Australia, Horse Song; A Story of the Naadam, set in Mongolia, Balarama; A Royal Elephant, set in India, and Puffling Patrol, about the puffins of Iceland. 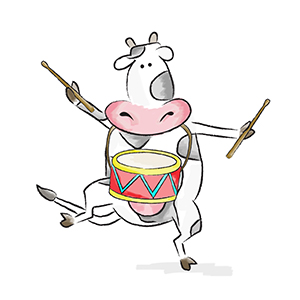 Join us for the third program in the Click Clack Moosic Series! The Singing Sheep asks us to sing along to E-I-E-I-O and learn about Pitch! We read Dooby Dooby Moo, Doreen Cronin’s third book in our series. Come see what these crazy Click Clack Moosic animals do when they enter the county fair talent show! Uh Oh!